Recently in April of 2014   Pete DeLorenzo's HIT Song " They All Remind Me Of You "  just received International Recognition and Airplay in 90 Countries Worldwide.  Special Thanks To Fausto Ernesto Zanetti of  Radiopuntostereo Multinational  http://radiopuntostereo.it/ in Toscolano-Maderno, Italy and Patrick Tamillo

You are listening to Mr. Delorenzo's Original hit song "They All Remind Me of You"  the theme song for the Motion Picture "The Mentor" 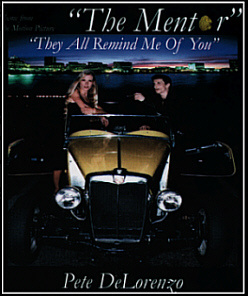 Soundtrack for "The Mentor"

The following is the back story to the making of Mr. DeLorenzo's first original hit single

"They All Remind Me of You"

Mr. DeLorenzo wrote this song and the music in 1995 and originally recorded it for first time, in a remote studio the with a colleague of  his, Mr. Leo Roth on acoustic guitar.  The following year in 1996,he collaborated with another  extremely talented song writer and composer and long time friend, Mr. Matt Garbo on keyboards, for the second recording session in attempt to fatten up the song.  Mr. Garbo believed in the potential of Mr. DeLorenzo’s  song so much that he advised Pete to go into  full blown production on the song.  In 1997, Mr. DeLorenzo entered the recording studio of  ESAD Records and approached the legendary Chaz Jones to collaborate the genius talents of all his lead guitar work, percussion and arrangement of  Mr. DeLorenzo’s song.  Pete then recorded the final vocal after which Pete Produced and Published his song on his own label PKI Productions and sought out distribution for the song.  It was then sent to all major A&R Departments as well as District Managers of many record chain stores.

In 1998, with the help of a very dear friend and long time colleague, Mr. Don K. Reed of  WCBS FM 101.1 Pete was invited to do a radio interview On the air with Don on his “Doo Wop” Hour and this was the first time on major radio Pete’s song got major air play.  THE REST WAS HISTORY! Because of this interview with Mr. Don K. Reed and WCBS FM, Mr. DeLorenzo is eternally grateful and this was the beginning of The launching of “They All Remind Me Of You”.  At that point Mr. DeLorenzo had received overwhelming response from other major market stations, and again with the assistance of the Renowned Actor and Radio Personality Mr. Vinny DeVingo of Z100, the song began getting a lot of attention, and through affiliation of Z100 this led Mr. DeLorenzo to release his song exclusively to all Sam Goody’s.  Autograph signings and  Promotion went out big time.

It was at that point Mr. DeLorenzo decided to make this song “They All Remind Me Of You” the theme song for His motion picture, “The Mentor”.  In 2001, his song took the Prestigious Blair Hammond Award for Best New Male Vocalist and since then it has been Requested as a Wedding Song of which Mr. DeLorenzo performed at 7 weddings so far.  Also Mr. DeLorenzo has had the extreme honor to dedicate his song to all  of our Fallen Heroes in the wake of 911 for  various tributes. This, now being Mr. DeLorenzo’s First Hit Single, the song was most recently honored when Pete was requested to perform it in dedication to A LIVING LEGEND, MR. BEN E. KING for the Ben E. King Foundation. Also at a recent 70th Birthday Celebration Pete dedicated his song, once again to the LEGENDARY MR. FREDDIE SCOTT. In March of 2005, Mr. DeLorenzo had the extreme honor of dedicating his song on live TV on Time Warner to his real life mentor, Mr. Joe Franklin.

Mr. DeLorenzo's Hit Single is still receiving airplay on Major Market stations as well as satellite and internet blog radio stations and will be reprised on the soundtrack as the Theme Song for The Motion Picture "The Mentor" which is and will be available in all Sam Goody Stores exclusively.

Buy Cheap Zithromax/Azithromycin Internet Pharmacy! azithromycin doctor
by derp over a year ago